Bouland Motors presents the 1:3 scale Formula 1 COSWORTH Double Four Valve V8 F1 engine. Over 3 years development have gone into the construction of this high-end quality piece of beauty. This impressive fully working scale model engine with a capacity of 76cc exists out more than 1200 parts and can rev up to 10.000 R.P.M. All parts are made in The Netherlands in the best quality possible! Before delivery each engine will be fully tested and adjusted. 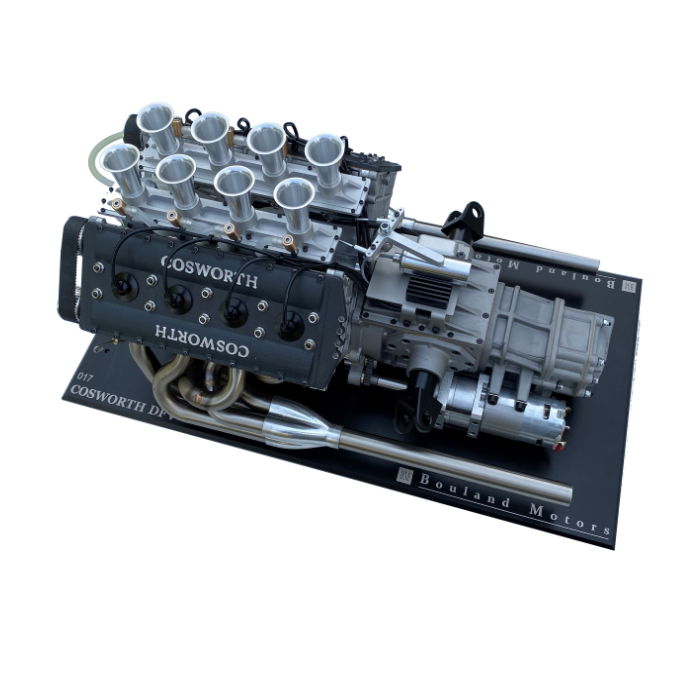 The first COSWORTH DFV F1 engine was unveiled in April 1967, and won the first race in which it competed – the Dutch Grand Prix on 4th June 1967. The engine was conceived and designed by Keith Duckworth who founded COSWORTH together with Mike Costin in 1958 and it became the most successful Grand Prix engine of all time.

When the Ford- DFV COSWORTH engine made its winning debut at Zandvoort, it revolutionized the sport since one of the concepts behind the Ford- COSWORTH DFV engine was something completely new to the Grand Prix world. For the first time, the idea of the engine forming a structural part of a Formula One car was introduced – an idea that remains fundamental to Formula One construction even today. The Ford-COSWORTH DFV engine and its derivatives went on to win 155 Grands Prix. The final win came as late as 1983, when Keke Rosberg claimed victory in the Monaco Grand Prix, just before Formula One entered the turbo era in the mid 1980’s The engine was a 2.993cc V8 with a bore x stroke of 85.67 x 64.897 mm producing over 400 bhp @ 9,000 R.P.M. from the start, reaching 510 bhp @ 11,200 R.P.M. by the end of its career.

Bouland Motors has chosen to model this iconic engine as they where most legendary F1 engine ever. Of course not only had to look good it also had to run good! Finally including all bolts and nuts it took a total of 1200 parts to finish this beauty. The engine features titanium valves, 7075 billet aluminium connecting rods 7075 billet aluminium pistons, piston rings, 16 casted parts, 8 working carburettors which look like the fuel injection system from its big brother, real working water pump and so on. Its happy to run and sounds magnificent. All custom made parts made in the Netherlands

It is 1958. Two employees of Lotus decided to start together for themselves. Not that Mike  Cos tin and Keith Duck worth  were not to their liking, but they wanted to focus more on engine technology.

Cosworth starting to get a name by its successes in motorsport. Both in touring cars, Formula classes and rally championships they are hugely successful. Remember the DFV V8, which many F1 car is driven, and there are few cars that have won more rallies than the Escort RS. Many Cosworth engines originated in Ford engines.

It has always been an independent company. In 1999, the branch was passenger, Cosworth Technologies sold to Audi, which it could sell to Mahle in 2005. Cosworth still operates and does what it does best: developing engines and engine parts.